Today I went up to check out the old “hood”. It has been about a year since the devastating Four Mile Fire and things are kind of coming back. I took the camera but was pretty uninspired for most of my tour. I went up Logan Mill, then to Gold Hill and down Sunshine. It was the first time that I had really looked around since the fire. It is still pretty brutal. Lots of black trees, regraded lots where my neighbors homes used to be but also some new grass and growth. There is also quite a bit of evidence of massive runoff on the way up through Gold Hill. I was especially disappointed to see that the old Inn in at Summerville was gone. I was not aware that it had been destroyed. It was not until I was heading down Sunshine Canyon that I felt there were worthy images to be made. There was an area where they had attempted to decrease erosion and spread straw and I imagine wildflower seed. The Flowers were amazing and a beautiful contrast to the burnt trees that stretched into the distance. What a great idea. It really was cool and made for interesting images. 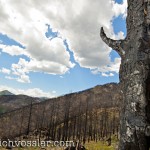 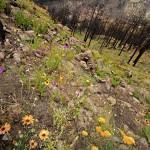 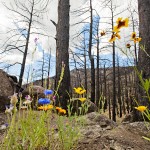 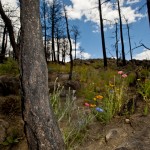 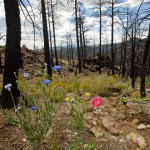 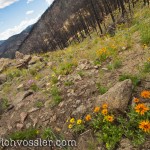 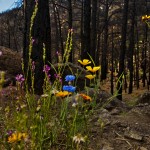 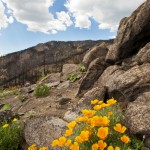 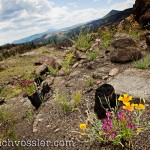